Listening to the Star of Ethiopia in 1915: Aural Histories, Sonic Paratexts, and Cinematic Conjunctions

This project is an attempt to understand the aural histories and sonic politics of a minor but nonetheless rich creative project by Dr. W.E.B. Du Bois, a pageant, The Star of Ethiopia.  Unlike other scholars who have examined the pageant, I look to its aurality, primarily its use of music.  I argue that the music further textures the pageant’s revision of history by calling for a black aural historical consciousness.  In looking to the pageant’s paratexts, articles and opinion pieces in The Crisis magazine (December 1915), off-text discussions of the pageant orient reader/viewers to its aurality.  Further, Du Bois does mobilizes the pageant’s fertile aural terrain in part as a response to the audio-visual culture emerging in 1915, particularly in the face of the aesthetic innovations unfolding in American cinema heralded by a deeply racist film, D.W. Griffith’s film The Birth of a Nation.

The future of this project will include a web based site that approximates an experience of listening to the pageant and honoring its music.  Though no recording of the pageant exists, many tunes that were included survive as recordings.  Many of these can be found on the University of California Santa Barbara Cylinder Audio Archive and the Library of Congress National Jukebox data bases.  Du Bois incorporates a wide variety of African American musical genres, Americana, and popular music.  The pageant’s music features African American musicians as contributors to his aural historical project.  Linked below are some examples of the music and artists Du Bois includes in the pageant.

Listen to “Nobody Knows the Trouble I See,” an arrangement of the spiritual by J.Rosamond Johnson.

Songs of Labor and Transcendence: The Trianon Press Archive

Housed in UCSC’s McHenry Library, the exhibition showcased Trianon Press’ prolific publications, their meticulous production process, partnerships, and the work of the many individuals involved in the Press and the archive from its beginnings in Paris to the completion of its processing at UCSC.  The exhibition was designed and curated by graduate student CART fellows Jessica Calvacino, Hannah Newburn, Nicholas Whittington, and myself, Morgan Gates, under the supervision of CART Archivist Alix Norton and Outreach and Exhibits Librarian Jessica Pigza.

View the digital exhibit component, A Timeline of Labor and Transcendence: the Digital Trianon Press Archive on the UCSC CART website by clicking here. 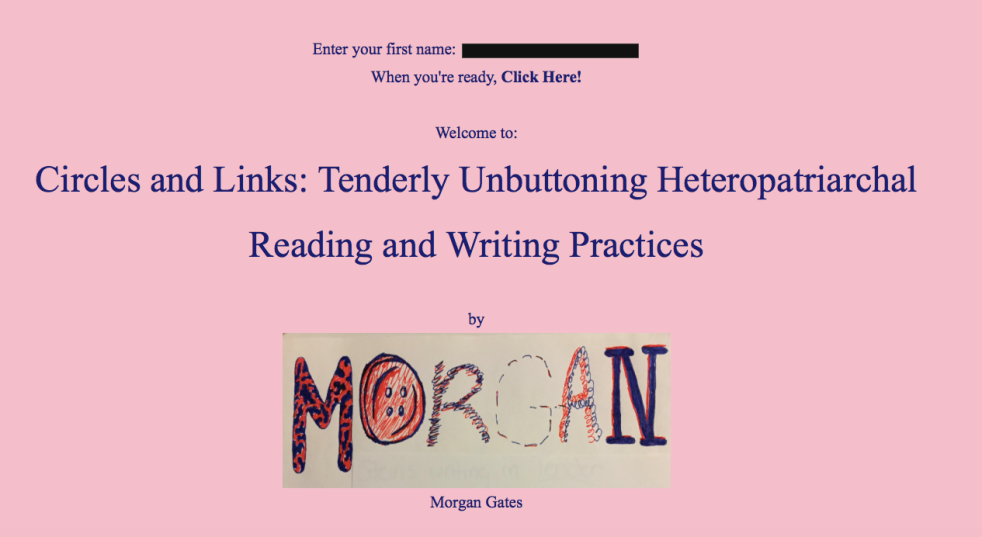 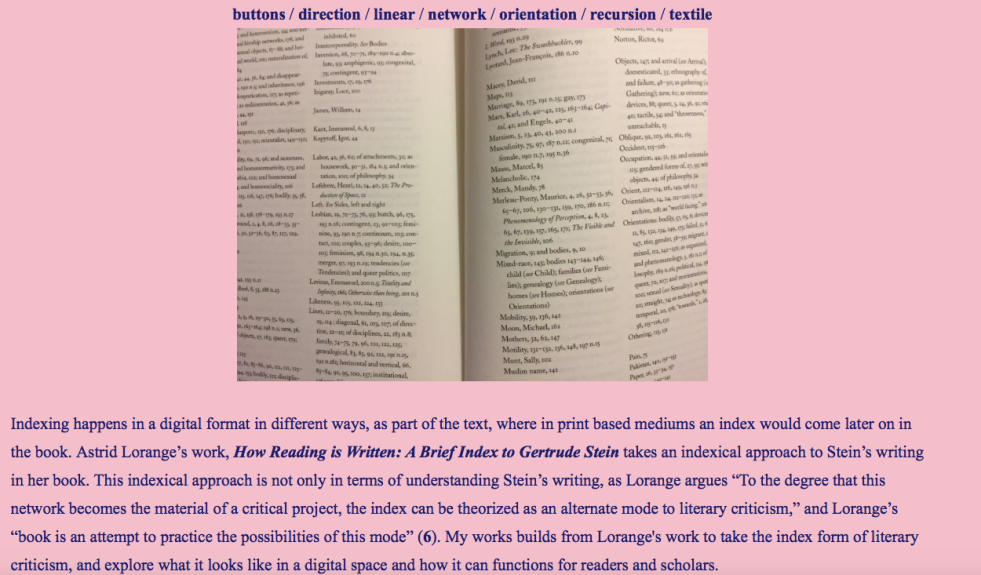 Created on the open-source html platform Twine, this project examines Gertrude Stein’s Tender Buttons and understands this text as a feminist and queer writing practice that resists linear thinking and dominant, patriarchal traditions in poetry.   With its focus on domestic objects and a narrative style that recursively circles about them, this text uses language differently than that which readers are accustomed.   Reading Stein, means learning to read differently.  Writing about Stein also requires learning to write differently, as I understand it.  This project welcomes visitors inside its analysis of Stein and invites them to move around as they see fit.  There is no straight linear essay to read but a networking of interrelated and linked sections organized around various concepts. The recursive patterns of revisiting and returning to passages that Stein’s text seems to invite are likened to hyperlinks, which is also to understand Stein’s work through and as a proto-digital text.  Links appear in-text, and in this way they also invite readers to not not feel compelled to complete any one section at any time.  It’s simple but aesthetically pleasing design (in my opinion, more pleasing to look at than a standard essay) argues for non-traditional and digital-born forms of scholarship.  It also includes original digital photographs that echo domesticity.  This interactive showcase allowed my to present my work alongside a variety of digital-born scholarship underway and completed at SDSU while allowing attendees to navigate my project.

In this lightning talk, I presented my critical investigation of Kara Walker’s silhouette tableaus, particularly Gone: An Historical Romance of A Civil War as It Occurred b’tween the Dusky Thighs of One Young Negress and Her Heart.  This work explores the queer potential of racial and sexual stereotyping in American visual culture by using masochism as a methodological approach to Walker’s use of humor and violence in the artist’s imagined depictions of Antebellum sexual history.  The violent and disturbing sexual explicitness of her work radically argues against damaging fictions by deploying them.   I demonstrate how humor and the silhouette medium of the tableau work masochistically to create ambiguous emotional affects in viewers that can easily result in a misreading.  Misreading is, however, productive.  This project inevitably served as the beginning of a chapter of my M.A. thesis.